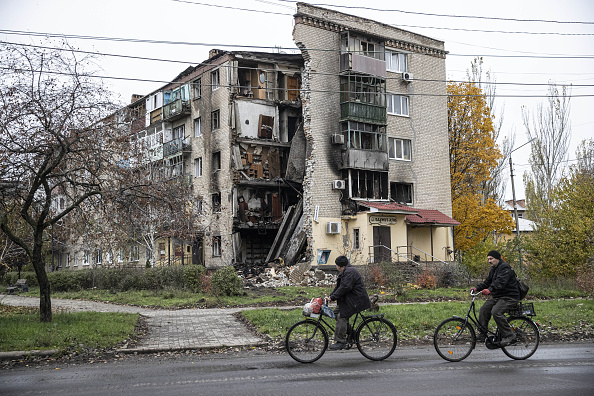 EXCLUSIVE: Anonymous Content, Alexander Rodnyansky’s AR Content and The Atlantic have secured rights to journalist Peter Pomerantsev’s article for The Atlantic ‘We Can Only Be Enemies’ and will adapt it for film.

Myroslav Slaboshpytskyi, the Ukrainian director of well-received Cannes festival drama The Tribe, is attached to pen and direct the war crime drama adaptation.

Published in May 2022, Peter Pomerantsev’s article for The Atlantic follows a Ukrainian family whose house is shelled at the onset of the war. Unable to reach Kyiv, they return to their village. Taking refuge in their bomb shelter, they have no choice but to cohabitate with the Russian soldiers responsible for the bombardment.

Nick Shumaker and Robert Walak will produce the film on behalf of Anonymous Content with Leviathan and Stalingrad producer Alexander Rodynansky producing for AR Content. Anonymous Content CEO, Dawn Olmstead and CCO, David Levine will serve as executive producers alongside Michael Kupisk for AR Content and Linzee Troubh for The Atlantic.

Anonymous Content and CAA Media Finance will co-represent North American rights. Shumaker will be at the AFM in LA next week discussing the project with potential partners. Shumaker, who joined AC from UTA last year, is leading the company’s fledgling New York-based sales and finance division, AC Independent.

Pomerantsev is a Senior Fellow at Johns Hopkins University, Agora Institute, where he co-directs the Arena Initiative, a research project dedicated to overcoming the challenges of digital era propaganda. His book on Russian propaganda, Nothing is True and Everything is Possible, won the 2016 Royal Society of Literature Ondaatje Prize, was nominated for the Samuel Johnson, Guardian First Book, Pushkin House and Gordon Burn Prizes.

Slaboshpytskyi is in pre-production of his film The Tiger with Darren Aronofsky/ Protozoa producing, along with Plan B and Wild Bunch International. Alexander Skarsgard and Dane DeHaan are attached to star.

“This story is extremely important to us and to me personally, not only as a producer, but as a Ukrainian. Peter is one of the best researchers and journalists working today and it was no surprise his article was as tough, deep, and incisive as he,” said Rodynansky. “Pairing this material with Slaboshpytskyi, takes the story to a different level. This film addresses the global question – how and why do societies continually regress into brutality – and will be a sobering look at dehumanization.  It requires brave and honest partners to tell the story the way it needs to be told and I could not ask for better than Anonymous Content, a company of storytellers I have always admired for their dedication to talent and authenticity.”

“Since the moment I was awakened by Russian rockets exploding in my native city of Kyiv on February 24th, it has become very important for me to make a personal film about this war,” said Slaboshpytskyi. “When Alexander and Nick shared this this article with me, I knew that it would be an excellent opportunity to try and find meaning in this monstrous war against my people and my country.”