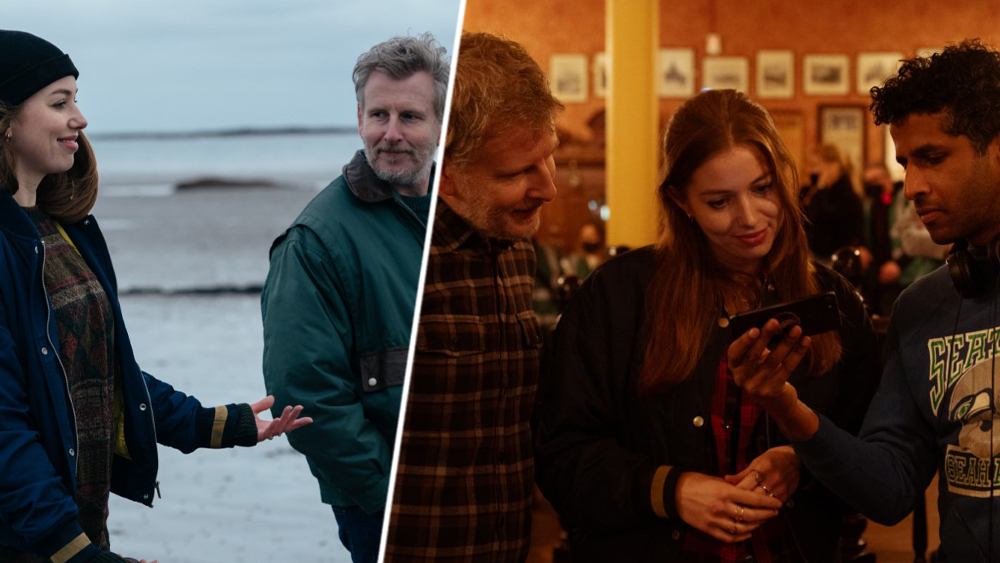 EXCLUSIVE: Prasanna Puwanarajah as an actor has appeared in Doctor Foster: A Woman Scorned, Ten Percent and Patrick Melrose, and he’ll next pop up in two episodes of The Crown‘s upcoming fifth season portraying Martin Bashir, the controversial journalist who conducted the infamous BBC interview with Princess Diana. However, on Thursday he’ll wear a different hat when the Belfast Film Festival opens with the world premiere of Ballywalter, which marks his feature directing debut.

The film stars Northern Irish comedian and presenter Patrick Kielty — husband of So You Think You Can Dance host Cat Deeley — in his first major acting role, as Shane, broken after the collapse of his marriage he chooses to rehabilitate by joining a stand-up comedy course; and Seana Kerslake’s Eileen, a sharp-tongued Ballywalter local who has moved back home with her mum and pregnant sister, and borrowed her exe’s battered Toyota to drive as an unlicensed taxi.

The two lonely souls meet when Shane books a regular cab, driven by Eileen, to ferry him to his lessons. He can’t tell a joke, while Eileen’s acidic one-liners are, unintentionally, hilarious.

Over time the film has been referred to, variously, as a comedy, a comedy drama and a dark comedy but Puwanarajah said “it’s reasonable to call it a human drama,” during a recent four-way Zoom call with Kielty, Kerslake and Deadline.

The film considers the “absurdity and challenge in human life,” he said. “I guess I’m quite pleased that it just defies a genre pin in that way,” he added, while acknowledging that it’s not that useful “for our colleagues in sales.”

Kielty, who has performed countless comedy spots on TV, and showed a more serious side when he returned from his home in London to Northern Ireland to present BBC documentary My Dad, the Peace Deal and Me in 2018, agreed Ballywalter is a drama. “When you’re hurting and whenever you want to hide stuff, especially if you’re Irish, comedy is the first wall that you put up. The comedy in the film is Shane and Eileen both sparring with each other and both trying to push the other away with a laugh or a smart ass remark.”

Kielty noted that there is comedy in the film, but it’s “an accompaniment to the dramatic journey that they take.”

Kerslake has displayed such acerbity before in the dark TV comedy Can’t Cope, Won’t Cope, though it’s unleashed with more precision in Ballywalter.

The film’s based on a screenplay by Stacey Gregg, who wrote and directed psychological thriller Here Before, also shot in Northern Ireland.

Gregg developed her script with Puwanarajah and producer James Bierman of Empire Street Productions, the film and stage company behind the play Prima Facie, which Jodie Comer (Killing Eve, Free Guy) played in the West End and will repeat on Broadway in Spring 2023.

Northern Ireland itself is essential to the film. Puwanarajah said that while setting it there meant quickly exhausting financing opportunities, it would be a “different film” if moved to somewhere else, such as the Cornish coast or northern Scotland’s Aberdeenshire.

On the face of it, the film’s not ostensibly political yet it’s underpinned by politics. Puwanarajah said the film reminds him of his Sri Lankan Tamil family and “about the relationship we have with our past, the past that’s in the hills around you.” He added there are “bits of the Northern Irish story that are alien to me but other bits that feel incredibly familiar compared to living in England particularly as a post conflict heritage person.”

Kielty felt that the film reflected a lot about the country of his birth, which for much of the 20th Century was devastated in a battle for its future as Unionists and Irish nationalists engaged in conflict. “Northern Ireland is a place where people have had to do it on their own for a very long time,” he said. “There are so many moments where we haven’t been led and we’ve had to lead ourselves. A lot of that is at the heart of the film, which is about two people on their own who have to do it for themselves, and whether they can help themselves through it.”.

“In Northern Ireland today, people are surviving because of their relationships and friendships. They’re making their own future because no one’s actually helping them; no one’s actually leading them and the political world is letting them down. This is a story of two people that actually didn’t think they were going to make it, and ended up finding each other and realizing that maybe they could.”

Kerslake added: “No matter what story you’re telling, there’s such a huge political backdrop that you can’t get away from. As Eileen drives through the city you’re seeing the [political and religious] murals and you can’t help but think of all the generational trauma that’s still steeped in this place that people are trying to work through. But that’s something that gives that gives Northern Irish people a resilience.”

“That’s where the humor comes from,” she said with cool certainty.

The English-born Puwanarajah said that whenever he visits Belfast and other parts of Northern Ireland, “I genuinely feel a sense of feeling the rhythm of it in a way that I don’t when I go to Stroud [a posh town in Gloucestershire, England] or somewhere else.”

The filmmaker added that he “felt this eight-lane motorway of understanding the rules of humor in Northern Ireland and the deployment of humor there — the tone is so sharp, funny and acerbic.”

As an outsider he was able to to soak up that humor and permeate it throughout the film.

Kerslake’s from Dublin and she found it beneficial to learn and retain a Belfast accent throughout the five-week shoot. She stuck to it “even when I was in the phone to my mum at the weekends — it was quite strange.”

But the accent was integral, Kerslake said because “as an actor you’re trying to clutch onto everything to try to build the character, and then kind of let it all go. To have the accent down down was huge and something that you want to get it right.”

Language and behavior are so linked that when Kerslake went back to her own southern Irish lilt, she found readjusting hard. “I was trying to reshape my mouth to do what it did before,” she told us.

Kielty said that he had the same insecurity about his acting as Kerslake did with her accent. “Both of us were vulnerable,” said Kielty. “We had one table read where we all just put on the table what was scaring us and how vulnerable we actually were.”

Kielty praised Puwanarajah and Kerslake for getting him through it. There was a unique set of circumstances having to film during a pandemic and the isolation inherent in that, but with his director and co star “lifting” him through, the process became “something which was initially terrifying to just horrific.”

“Paddy [Kielty]’s being very modest,” countered Kerslake. “There wasn’t any of those actor tricks — he was an active actor in the scene. There wasn’t any pretence, phoniness or lies.”

In a way, strict Covid protocols introduced on set such as keeping distance and no communal activities helped the actors capture the sense of isolation their characters felt, especially when caged in the Toyota, which they couldn’t leave at will due to those safety processes.

Puwanarajah said that production staff did 650 Covid tests in five weeks. “In fact, we spent our entire contingency on protecting against Covid,” he adds, though health and safety had to help them choreograph movement when the two actors were in the car along with the director, cinematographer Federico Cesca (Industry) and a sound technician.

Puwanarajah feels moved the film created 150 jobs in Northern Ireland during a pandemic. “I think of the endeavor of that in isolation as being quite profound, actually,” he said.

A premiere and a comedy gig

The cast, crew and executives will be in attendance for the world premiere at the Crescent Arts Centre in South Belfast on Thursday. Well ahead of Ballywalter being chosen to open the festival, Kielty had signed a contract to launch a stand-up tour on the very same night as the Belfast Film Festival premiere. A car will speed him to the comedy gig as soon as the film finishes.

Deadline has seen Ballywalter twice, an early cut a year ago and a final print was viewed last weekend. There’s a scene, one of several that tickled this Deadline writer, where the stand-up course leader asks his students that if they could be a fruit, what would it be?

Deadline posed the same question to the Ballywalter trio.

Kerslake’s response: ”There are so many fruits that come to mind but none of them are suitable to say.” She considered a banana but then something else came to mind. “An out of season strawberry is what I am,” she delcared.

And Puwanarajah? “I feel like a pear most days.”