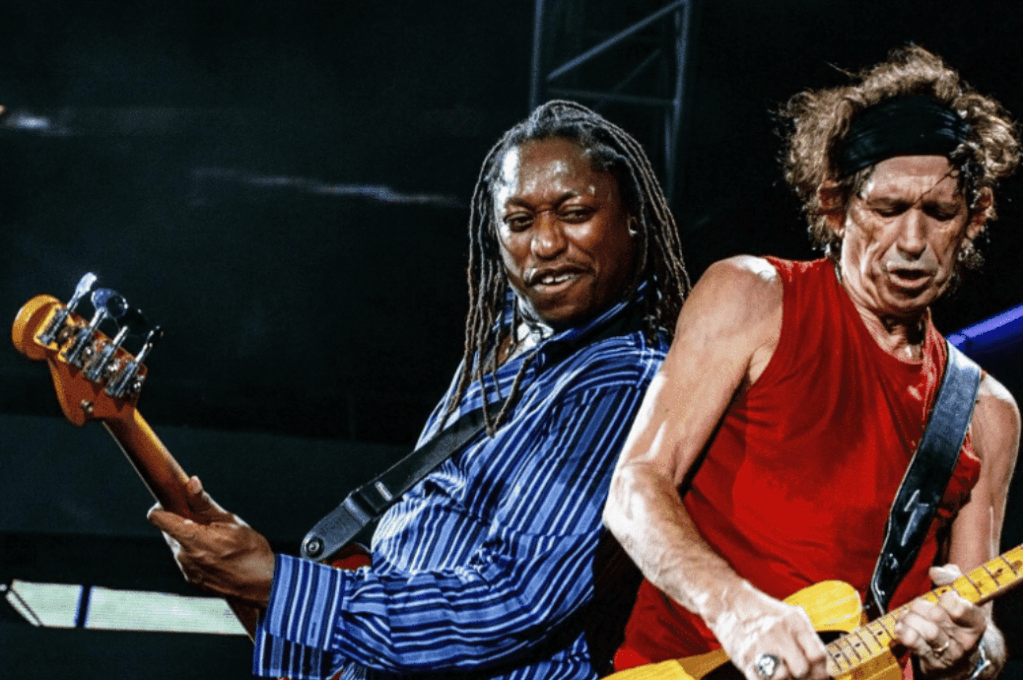 When the Rolling Stones’ original bassist Bill Wyman retired in 1993, it might have thrown sand into the steel wheels of the world’s preeminent rock n’ roll band. Instead, the group was able somehow to find a replacement worthy of Wyman in the fleet fingers and thumping thumb of Darryl Jones.

The acclaimed musician, who cut his chops playing with Miles Davis barely out of his teens, is the subject of the new documentary Darryl Jones: In the Blood. The film from Greenwich Entertainment, directed by Eric Hamburg, is now playing in theaters in limited release and debuted Friday on VOD platforms, including Amazon Prime and Apple TV.

“It’s not an easy thing to replace someone who is an integral founding member of a band like the Stones,” Hamburg noted at a Q&A for the film in Santa Monica Thursday night. “And yet Darryl was able to do it. And I think he’s brought a new element to the Stones that they needed. I don’t know if they could have gone on for the last 30 years if they hadn’t had Darryl Jones playing with them.”

At the Q&A, Jones pondered what he had to learn about the Stones and their music to earn a place in the band.

“One of the things that I first understood about Rock n’ Roll is that there is a certain amount of irreverence… there is a level of chaos that you kind of wrangle,” Jones said. “Once I understood that, and [drummer] Charlie Watts — the way he plays — really helped me to understand that not every ‘i’ has to be dotted, not every ‘t’ has to be crossed. Sometimes those loose ends are the real wonder and they’re the things that make that make the music human and make it special.”

The film explores the subtle role a bassist occupies in a unit like the Stones. Bass, like its homonym base, plays a foundational role in the music.

“Daryl has many jobs. I mean, he has to lock in with the drummer,” Hamburg pointed out. “He also has to be the third ‘weaver,’ as Keith [Richards] put it. Keith was just so incredibly effusive about Darryl.”

All of the current members of the Rolling Stones were interviewed for the film, including Richards, Mick Jagger, and guitarist Ronnie Wood. Watts, who died last year at the age of 80, spoke with the filmmakers before his passing. He praised Jones as both a musician and a good bloke.

“In a band you have to get on with everyone, really,” Watts told Hamburg. “And Darryl is one of those people who – he’s very easy to work with and very pleasant to be around.”

In some ways, as the film reveals, Jones was an unusual choice to succeed Wyman. Yes, he had played in Sting’s post-Police band, but he was steeped more in jazz than rock. That, ironically, really appealed to Richards and Watts.

“Charlie is a jazz drummer in his heart and in his feel,” Richards observes in the film. “And Darryl, with his jazz influence and background, it was a natural for me.”

Jones grew up in Chicago in the 1960s, with a father who taught him drums and a mother who exposed him to a variety of music. He picked up the bass at around age 10, and was tutored by a neighbor, Angus Thomas, a gifted bassist himself who went on to play with Miles Davis. At the age of 21, Davis invited Jones to join his group, and he performed with the revered trumpeter for about five years total, sandwiched around his time in Sting’s group. Jones said part of what he appreciated more fully through Davis was the difference between collaborating with fellow musicians on stage versus wanting to show off solo skills.

Jones said he learned “listening, in a way, and allowing what you play to be informed by the musicians around you, not informed by, ‘Oh, I got this great lick that I’ve been working on,’” he said. “One of the things that I say to students is, if you think about it, whether it’s music or a conversation with a person, listening is an act of love.”

Darryl Jones: In the Blood stands in contrast to documentaries about doomed musical artists – for instance, Asif Kapadia’s Amy Winehouse film; Janis: Little Girl Blue about Janis Joplin; I Called Him Morgan, about jazz trumpeter Lee Morgan, who was murdered by his common-law wife, and Bill Evans: Time Remembered about the late jazz pianist who struggled with drug addiction.

“This is not like you see so many movies about ‘this guy was a great musician, but he got strung out and he overdosed and he died, or was in a plane crash’ or whatever,” Hamburg said. “This is a movie about a very inspiring person. And, so I wanted to keep the focus on that.”

Part of what’s inspiring about Jones is that he still sees himself as an artist in development, exploring new horizons. The film shows him rehearsing and performing with a group he formed, The Darryl Jones Project.

“After years supporting musical greats, Darryl Jones brings his own soulful roots rock to the stage, showcasing original songs and deep covers,” the musician’s website says of his group. “His music tells stories from growing up on the South Side of Chicago and has influences from James Brown to Curtis Mayfield to the Beatles, as well as the legendary musicians with whom he has shared the stage.”

“I had a wonderful experience of building an instrument for someone and handing it to them and watching them fall in love with it,” he recalled at the Q&A. “There’s all these things that I want to do.”

He’s got new music coming out this month, including a song used at the end of Darryl Jones: In the Blood. He says he’s “just gonna keep releasing music. And some of it’s about politics, some of it’s about love. A lot of it’s about family. ‘In the Blood’ is really a song written from the perspective of my brother and I. And what I’m speaking about is just how blessed I feel to have been born to the parents that I was born to. And how all of this that has happened, I think, is in direct relationship to how I was taught to move in the world by my parents.”

And when the Rolling Stones call, he’ll be there, helping them start it up and keep it going.

Hamburg says there’s a lot one can learn from Darryl Jones.

“I hope [the film] will inspire young people to pick up an instrument and play and write music, write songs, express themselves,” the director said. “Darryl does not fit the clichés of rock stars. He’s not arrogant. He’s not on a big ego trip. He’s very humble, down to earth, modest, in touch with his roots.”