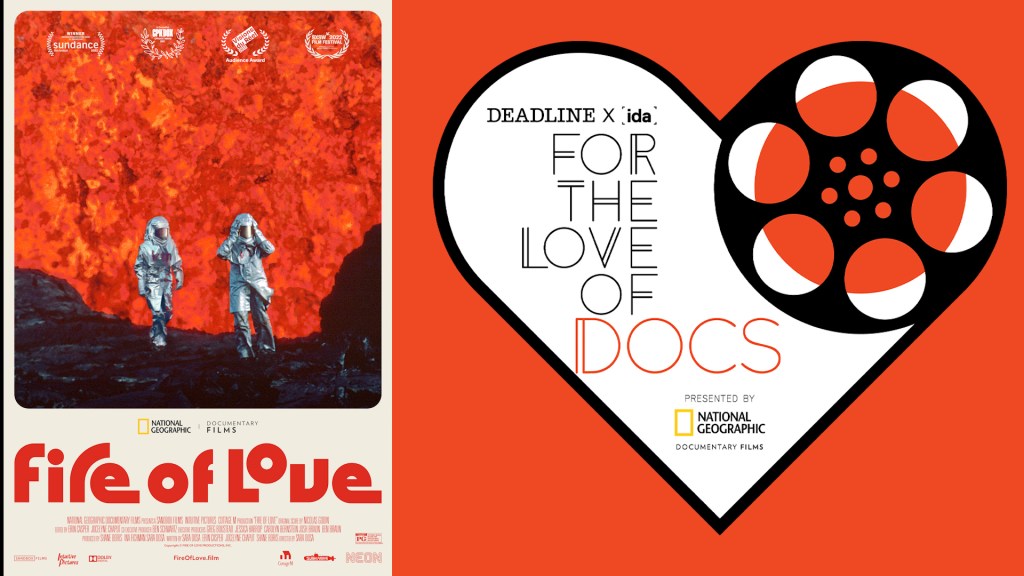 It’s been said that Katia and Maurice Krafft, the couple at the molten center of the award-winning documentary Fire of Love, loved two things — each other and volcanoes.

The French scientists became famous decades ago for their study of volcanic activity around the world, an inherently dangerous business if you insist on doing it up close, as the Kraffts did.

“Katia and Maurice were very much part of the vanguard of volcanology in the late ‘60s and early ‘70s,” director Sara Dosa explained during a panel discussion of the film as part of Deadline’s For the Love of Docs virtual screening series, sponsored by National Geographic. “It was a young field and was seen as quite an eccentric field growing out of geology and earth sciences. But they were part of kind of a cohort that was dedicated towards studying active volcanoes. It was extremely risky.”

Katia took still photographs and recorded detailed scientific measurements, while Maurice primarily focused on filming the awesome displays of nature that erupted before their eyes. The Fire of Love team built their documentary almost entirely from the Kraffts’ archive, but as visually stunning as the imagery was, it did lack something – sound.

“It was 16-millimeter footage that just was silent,” noted Jocelyne Chaput, who edited the film with Erin Casper. “Erin and I at first thought, no problem, we can edit this without sound and just approach it purely visually and approach the sonic sphere later in the process. But very early on that idea went out the window because immediately, as soon as you start editing, you just want to hear the worlds that the Kraffts captured.”

The editors combed through disparate sound archives to find appropriate material. Some of what they retrieved was quite obscure, like the noise from a French vehicle the Kraffts drove up a snowy Icelandic mountainside.

“We had a really fun time perusing sound libraries, going on deep dives,” Chaput said. “Erin found a very specific car engine sound of that Renault R4 that shows up in Iceland.”

The documentary explores how the Kraffts became increasingly fascinated by “gray” volcanoes – the kind that tend to blow their stacks in unpredictable fashion. They traveled to Japan in June 1991 to capture one of those gray furies — Mt. Unzen on the Shimabara Peninsula. The Kraffts and dozens of others were killed by a pyroclastic flow that escaped a channel and rushed towards them. The filmmakers made the creative choice to reveal at the top of the film that the study of volcanoes had sealed the Kraffts’ fate.

“We found pretty quickly [in edit] that acknowledging it set a ticking clock that let you know that we’re going to come back to this,” Casper said. “It sort of put a certain primacy on the footage and their story knowing that their time was limited.”

Katia published extensively and Maurice made numerous films, yet not a lot was understood with certainty about the origins of their relationship – for instance, precisely how they first met. Narration written by Dosa, Casper, Chaput and producer Shane Boris acknowledges these mysteries, but does not try to resolve them.

“That was a big part, actually, of our film was trying to embrace the unknowns,” Dosa said. Boris added, “There were a million different questions… that were left unanswered. But to us, [the Kraffts’] entire approach to living, to studying volcanoes, to creating cinema was to try and understand what wasn’t understood. So, we felt right at home in that process and tried to follow their lead.”

Watch the For the Love of Docs panel discussion in the video above. Our virtual screening series, sponsored by National Geographic, continues with a new film every Tuesday through November and into December.