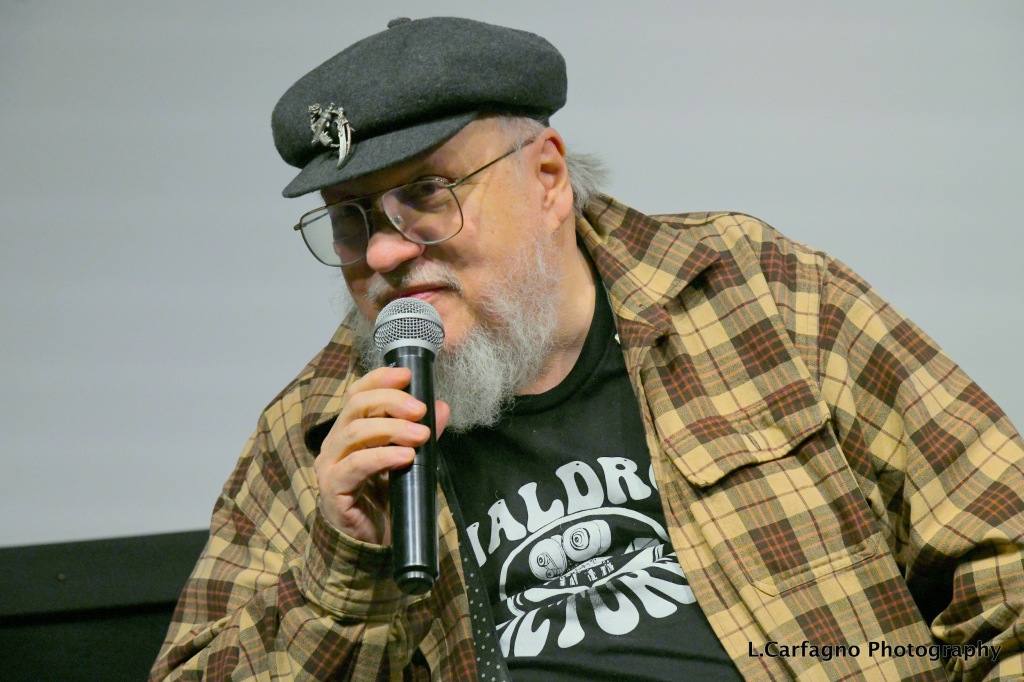 Days before a Targaryen civil war erupts between Rhaenyra and Alicent on the season one finale of HBO’s House of the Dragon, you’ll find the series creator staying mum on fire-breathing animals and talking up his latest rotoscope animated short, Night of the Cooters, in his Santa Fe, NM stomping ground.

The Vincent D’Onofrio cowboys vs. aliens directed short based on the Howard Waldrop short story is one of four short movies that Martin is producing in what is shaping up to be an anthology either for the big screen ala Creepshow or TV ala Love, Death and Robots.

Night of the Cooters follows a crusty sheriff, played by D’Onofrio, who musters up the townspeople in his Texas town to take on an invading UFO. The pic played last night at the Martin owned Jean Cocteau Cinema where the Game of Thrones architect sat for a Q&A as part of the Santa Fe International Film Festival.

The second, which is currently shooting in Santa Fe under the helm of Steven Paul Judd, is Mary Margaret Road-Grader which Martin billed as a “Native American-Mad Max story about tractor pulls and feminism.”

Then there’s Waldrop’s most notable work, The Ugly Chickens, about the extinction of the dodo, which is about to shoot in Toronto with Kodachrome‘s Mark Raso directing.

“We have Felicia Day signed up to play the lead role,” Martin told the audience.

Martin bought the rights to Waldrop’s short stories four years ago. When D’Onofrio was in town filming his directorial The Kid. Martin sat down to dinner with him.

“I have these scripts, one about a constipated sheriff,” beamed Martin about his pitch to the Men in Black actor for Night of the Cooters.

It was D’Onofrio’s idea to have the film, which was shot in Santa Fe, to receive the rotoscope treatment. The Daredevil actor drew on a napkin what the tentacled alien would look like. Originally, Martin conceived the short, written by Joe R. Lansdale, as live-action.

“We have great tax credits while Texas has no tax credits,” said Martin about shooting what was a Texas-based story in New Mexico.

He encouraged the audience to vote again for Gov. Michelle Lujan Grisham who has been behind the state’s film and TV tax incentive program. In fiscal 2022, film, television, and digital media production industry in New Mexico reached a record $855.4 million, +36% over fiscal year 2021.

“Short films don’t get a lot of distribution, people don’t see them except at film festivals,” Martin continued.

However, if Martin can build a house for dragons, he can also do so for shorts.

Jane Fonda Says She Will Return To D.C. For Climate Rally And Protest