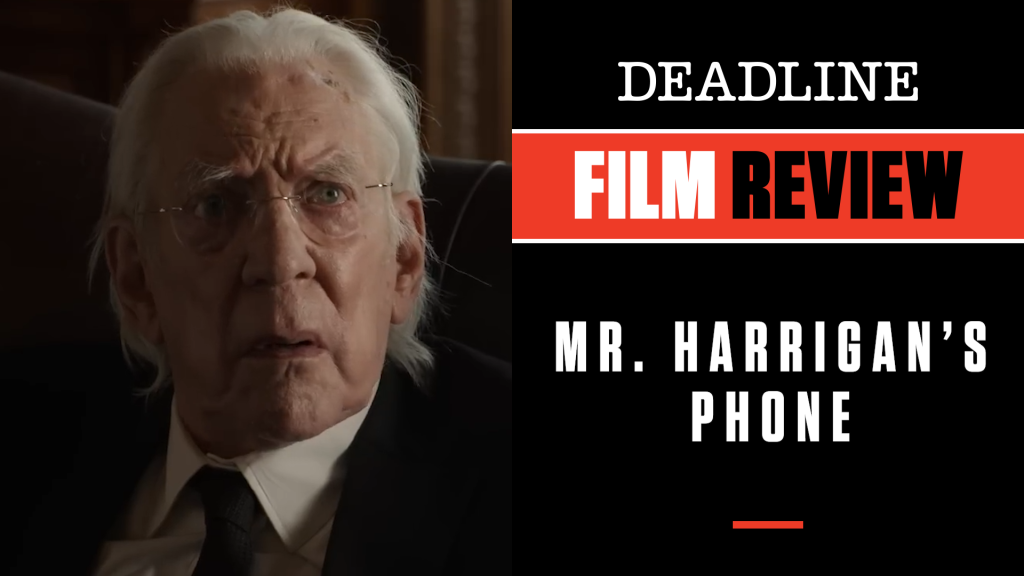 When you have a movie adaptation of a Stephen King story with It star Jaeden Martell, produced by Jason Blum’s Blumhouse and American Horror Story’s Ryan Murphy and hitting Netflix just mere weeks before Halloween, you might be right to think we’ve got a new horror film on our hands. However, Mr. Harrigan’s Phone is not an entry into King’s canon of terrorizing books. Actually in this case it was a short story, a novella called “If It Bleeds,” that has led to this smart and sensitive film adaptation by writer-director John Lee Hancock, and if indeed any horror is to be found here it is at the hands of our iPhones when they get into the wrong hands.

Actually the only reference of the word “horror” in talking about this film is in its couple of references to the line, “the horror, the horror” from Joseph Conrad’s Heart of Darkness, one of many books that are the subject of readings between a young New England teen named Craig (Martell) and the small town’s filthy rich old man Mr. Harrigan (Donald Sutherland), who summons him to his huge and imposing mansion on a regular basis to read to him from literary classics like Lady Chatterley’s Lover, A Tale of Two Cities and many more.

Beginning in 2003 when he was quite young (played by Colin O’Brien at that age) and impressing Harrigan with a Bible reading at the town’s church, Craig finds satisfying steady work for years as we see when the story skips forward and the role is now played by Martell, who ages from 15 to 18 over the course of this unique relationship with the crusty senior citizen. Craig’s mother died when he was very young and he now lives with his nice and well-meaning dad (Joe Tippett), who tries hard as a single parent but can’t help but be a little envious of the connection his son has with this man who even gives him a scratch-off lottery ticket that pays off to the tune of $3,000.

Craig is also a somewhat loner of a teen at his high school, where he is regularly bullied by a towering Kenny Yankovich (Cyrus Arnold) who could scare the hell out of any kid. Craig also desires his own cell phone, finally gifted to him one Christmas by dad. Later he even gets one for Harrigan, who rejects the idea until Craig shows him he can get instant stock market quotes without waiting for the next day’s newspaper. That phone takes center stage after Harrigan dies, leaving his young reader $800,000 in a trust, as well as inadvertently that phone he was clutching when he keeled over. At the funeral, Craig puts it into his casket as a last act of their friendship, but when he misses Harrigan and even dials his number just to talk about being bullied he is shocked when he gets a mysterious text back. Whoa. Then some very weird stuff starts happening and Craig finds out the real power of iPhone when it is operated, perhaps, from the great beyond. Or is it?

More in sync with film adaptations of King stories like Stand By Me, The Shawshank Redemption and The Green Mile, this engaging tale might have actually made for a great Twilight Zone episode on its surface, but underneath King and Hancock mine it for much more of a coming-of-age story, the moving relationship between two people from very different generations connected by literature, and even a cautionary warning about the evil things that can be contained via the internet, beautifully stated in the film’s best scene when Harrigan talks about the negative side of having a device like this to hook up with the world.

When you have a commanding presence like Sutherland involved you can do no wrong and he is splendid here, as is Martell who has been so good in everything from St. Vincent to Apple’s limited series Defending Jacob to even King’s It. Tippett is terrific as the dad, and there’s warm support from Kirby Howell-Baptiste as a beloved teacher of Craig’s. Peggy J. Scott has her moments as Harrigan’s housekeeper Edna as well. Arnold is a bit too much of a bully though to escape the stereotype of that high school staple.

Props to the pitch-perfect production design of Michael Corenblith, as well as Javier Navartrete’s effective, sometimes creepy score. Hancock (The Blind Side) is in total control of every beat of the story, as he has been in sadly underseen and underrated gems like The Founder, Saving Mr. Banks and more recently a great Denzel Washington thriller The Little Things.

In addition to Blum and Murphy, this engrossing film was also produced by Carla Hacken. It begins streaming on Netflix on Wednesday. Check out my video review above with scenes from the movie.

Do you plan to see Mr. Harrigan’s Phone? Let us know what you think.