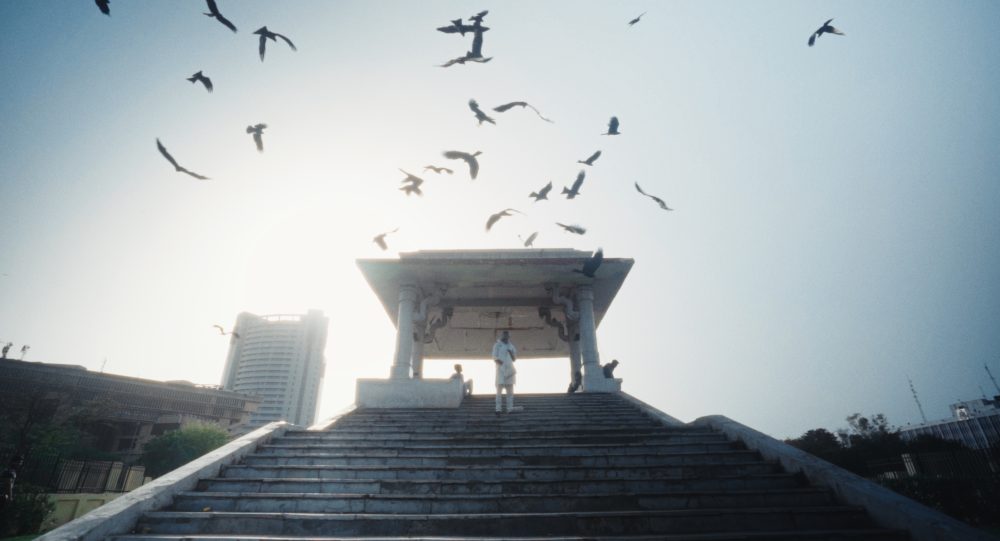 One of the top contenders for Best Documentary at the Oscars this year ranges from the skies above Delhi, India to a basement below the city’s north end.

In All That Breathes, brothers Nadeem and Saud operate a subterranean workshop-cum-makeshift animal hospital where they aid injured and ailing black kites, a bird of prey increasingly vulnerable to Delhi’s intense air pollution.

“I was really gripped by this figure of the black dot in the sky, which is the black kite,” recalls filmmaker Shaunak Sen, “the lazy gliding dots that you see — one of the them starts falling down. And I remember seeing this vaguely while driving my car one day and I was truly gripped with this figure. So, I started researching what happens to birds when they fall down. And that’s when I came upon the work of the brothers. The minute that you walked into that tiny, damp, air-lit basement, and you see the metal cutting machines on one side and these incredible regal birds on the other, it’s cinematically dense and riveting.”

All That Breathes, from Sideshow and Submarine Deluxe in association with HBO Documentary Films, opened in theaters in Los Angeles on Friday, a week after debuting in New York. The film has been embraced since its world premiere last January at Sundance, where it won the Grand Jury Prize for World Cinema Documentary. It went on to win the “Golden Eye” (L’Oeil d’or) award at Cannes as the festival’s best documentary, and was nominated this past week for a Gotham Award for Best Documentary Feature and shortlisted for the IDA Awards.

The recognition has come as something of a surprise to Sen, for only his second documentary.

“Just to get into the likes of Sundance and Cannes, let alone winning them, is already at the top of my desire matrix,” he tells Deadline. “It’s really something that feels not entirely processed. Now to have the film open theatrically in the U.K. and U.S. — my brain is still wrapping itself around it.”

Over the years, Nadeem and Saud, along with their trusty assistant Salik, have rehabilitated more than 20,000 birds, most of them kites. More and more of them are suffering not only from injuries but metabolic bone damage and neural deformities as a result of air laden with harmful particulates. The birds patiently allow the brothers to tend to them, sensing, it would seem, their healing intent. Not everyone on the film team felt comfortable being in tight quarters with what Sen describes as “ferocious raptors.”

“Our producer and my close friend Aman [Mann] is petrified of kites and wouldn’t work close to them,” Sen explains. “I am also not super comfortable, but I can be at arm’s length. And some of us are very comfortable with it.” Comfortable or not, the director felt compelled to film the birds “as wondrous, otherworldly, awe-inspiring creatures.”

The film has impressed not only for its exceptional cinematography (by DOP Ben Bernhard), but for an elegant voiceover culled from stray observations the brothers made over the course of shooting the documentary.

“When other birds fly, their effort shows. But the kite swims,” they note early in the film. Towards the end they observe, “Life itself is kinship. We’re all a community of air. That’s why we can’t abandon the birds.”

Nadeem and Saud are not necessarily men of many words, yet what they do articulate carries force.

“The brothers themselves have… rich inner lives, and they’re philosophers of the urban,” Sen comments. “So, we decided to put in these kind of voiceover bits… cut to either the images that invoke their childhood or the magic of the black kite or the ecological absurdity of the city of Delhi. They’re really obviously lyrical set pieces.”

There are humorous touches in the film, which come from the endearing young Salik, who is sort of like a baby bird to the brothers’ older, wiser birds.

“Salik brings a kind of unguarded innocence to the film, which is helpful because it contrasts with the seriousness of the brothers,” Sen says. “He gets the laughs and things happen to him — his glasses get taken away [by a bird]. He says absurd things, like, ‘What happens if there is a nuclear war — will the birds survive?’  …You really fall in love with him.”

Hanging over Delhi is not only smog but, as in the rest of India, rising political tensions as a result of strident Hindu nationalism. The brothers, as Muslims, are potential targets of violence. There is an obvious junction between the toxic skies and the toxic political atmosphere. While the director gestures toward that, he doesn’t make it an overt topic of All That Breathes.

“The sectarian stuff is very obvious in what’s happening. And you can sense the political as a kind of oblique tangential presence in the film, the fact that the city is on the boil and there’s a lot of turbulence developing in the city of Delhi the last two years,” Sen notes. “I was interested in how the real world leaks in, and that’s the way resonances or tremors of the world are sensed. The film is ultimately ecological and does not have a fractal political ambition.”

But he adds, “I feel it’s firmly political in the sense that the brothers are concerned about the relationship between humans and birds, which is its own kind of politics. But that’s what they’re interested in and we had to respect the integrity of their lives and their concerns.”

Sen doesn’t see his film as a nature or wildlife film. Rather, it’s a holistic meditation on the interdependence of living things – of all that breathe. The fate of birds connects with the fate of humans.

As airborne predators, kites scan the world below, looking for food. We asked Sen if he saw any similarity between the acute perception of birds and observational skills necessary for a documentary filmmaker.

“Not inasmuch as direct parallels between the kite and our visual jobs as filmmakers,” he responds. “But the act of birdwatching and filmmaking are very, very similar, because what happens is that birdwatching requires you to decelerate, to slow down, no quick movements, sit still patiently and become a part of the wallpaper of the world. There’s a kind of intense, radical looking that birdwatching requires, which is very similar to the kind of fly on the wall approach that a lot of documentary filmmakers have.”

He adds, “It’s just embracing the radical un-scriptedness of the world and just waiting, and eventually life rewards you with surprises. So, I suppose filmmaking is fundamentally ornithological in some ways.”