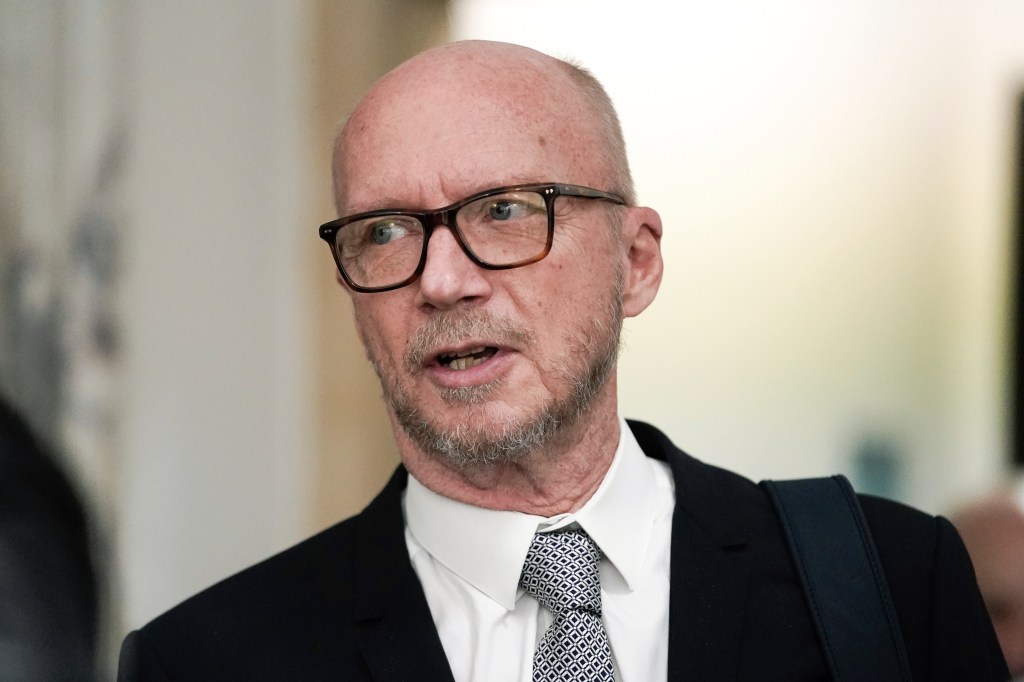 UPDATED with afternoon session: In texts from Haleigh Breest to a friend the day after she says she was raped by filmmaker Paul Haggis in 2013, Breest called the sex “rough and aggressive,” wrote “never ever again” and “He tore me.” She described “Trying to forget last night,” which she had spent at Haggis’ apartment in Soho after a movie-screening party.

“And I keep saying no,” Breest wrote to the friend in the string of texts, which were shown to jurors Monday on the fourth day of Haggis’ sexual assault civil trial in Manhattan. “But I guess that’s just an invitation or a challenge.”

Breest also wrote, “But he’s like the most charming person to have a conversation with and so smart!!!” She texted, “I don’t think he’s a terrible person and if you got to know him you’d like him but what he did was so wrong!”

Breest was a 26-year-old movie events publicist at a company in New York City owned by a friend of Haggis. She went to his apartment after the party, where she had been working, and said that once there, Haggis forced her to have unprotected oral and vaginal sex, and pushed his fingers inside of her. She testified that she passed out on a guest bed and left the apartment in the morning to go home and then back to work.

Breest testified that she called the friend twice that day and that she can’t remember her words, but in both conversations described what happened as a violent, unwanted assault. The first person to use the word “rape” in the texts shown to jurors was her friend. “I would call this borderline rape” the friend wrote.

“It sort of is Live and learn!” Breest texted.

A lawyer for Haggis, Priya Chaudhry, questioned Breest for three hours about the alleged rape, and about the tone and content of texts and emails between her and a handful of people including Haggis himself — who she saw 11 days later at another movie event she was working. Breest emailed Haggis afterward, writing, “It was so crowded last night! Did you have fun?” and inquiring, “What time zone are you on? :)”

“You end that email with a smiley face, correct?” Chaudhry asked.

Chaudhry also asked, “And you sought out an interaction with someone who you claim sexually assaulted you?”

Breest often tried to elaborate beyond a yes or a no but found some of her longer explanatory replies stricken by the judge, Sabrina Kraus.

On Friday, Breest grew agitated about five hours into a cross-examination by Chaudhry that Breest lawyer Zoe Salzman characterized afterward in a statement as the defense going “so far as to demand Ms. Breest stand up and reenact the rape.” Deadline has requested a response from Haggis’ lawyers.

Breest on Friday was standing next to the witness box and trying to show how Chaudhry how she squirmed to avoid Haggis. On Monday, the judge announced an end to any testimony that cannot be verbalized for the written record of the trial.

“Even the most inept words are better than a motion that couldn’t be observed for the record,” she said.

PREVIOUSLY, 11:40 AM: A Canadian woman testifying in the sexual assault civil trial of filmmaker Paul Haggis said Monday that when she rejected Haggis’ sexual advances at a television industry festival in Canada in 2006, he pinned her against a wall in his hotel room, and later groped and shoved her as she prepared to leave the hotel in a taxi.

The woman, who Deadline is not identifying by name, is one of four that lawyers for plaintiff Haleigh Breest plan to call to the stand with similar allegations of rape or attempted sexual assault. Breest, who has accused Haggis of raping her in 2013 when she was an events publicist, returned to the stand on Monday afternoon to resume a lengthy cross-examination that left her in tears Friday and brought the day’s testimony to an early close. The judge, Sabrina Kraus, allowed the other accuser to go first, out of turn, citing scheduling issues.

In more than two hours on the stand, Jane Doe said she attended the Banff World Television Festival in June 2006 on a prize fellowship in order to make industry contacts and pitch documentary projects; she has since left the field. Haggis, who came up through television, was the keynote speaker and main honoree at a festival in Banff, Alberta, for his Oscar-winning work on Crash and Million Dollar Baby.

“He had won two Oscars recently and that was big deal for a Canadian filmmaker,” the woman testified today.

She said she first saw Haggis speak at a Q&A, and then sought him out at a pub where attendees got to visit one-on-one with the festival’s guest of honor. She said the two exchanged jokes, pleasantries and talked shop, and then Haggis invited her to an exclusive after-party at the festival’s hotel headquarters. “It sounded like a great opportunity,” she said.

As soon as they climbed into a cab together, she realized how it might have looked to other attendees at the pub, she told a Breest lawyer, Zoe Salzman.

”I said I hope nobody got the wrong impression,” she testified. “He said, ‘People usually do.’ ”

On the cab ride back to the hotel, Haggis appeared to be talking and texting on his mobile phone to confirm the location of the after-party, she testified. Back at the hotel they walked down a long hallway to a room “and he took out his key to open it,” she said. “I was immediately apprehensive,” she said. She said she took a step backwards at the doorway and Haggis told her, “Don’t worry,” because the after-party was going to be in his room and more people were en route.

Inside, he poured them wine and held out the glass for her to step forward and claim it, and when she did, he kissed her, the woman testified. “I was totally caught off guard,” she said. She apologized. “I said I’m so sorry if I gave you mixed signals. I’m here for professional reasons,” she testified.

Haggis apologized and suggested they just sit on the couch instead and talk about her career, she said. But after 20 minutes or so he tried to kiss her again and when she got up and backed away, she said, she eventually backed into a wall with him advancing on her. He grabbed her arms and tried to kiss her once more, she testified. When she turned away to avoid the kiss, she said, “Mr. Haggis used his left hand to grab my face.”

“Cut it out. You’re making me feel like an asshole,” she said he told her. With one arm unpinned, she wriggled free and left the hotel room, and Haggis trailed her out, offering to pay for her cab back to the YMCA where she and the other fellowship winners were being put up for the festival. She said she agreed to the fare, and when the cab arrived, he grabbed her breasts from behind and kissed her neck, and then shoved her forcefully toward the cab — hard enough that she stumbled. He said he handed the driver money.

“I felt humiliated. I felt gross. I felt stupid. I just wanted to get out of there,” the woman testified. Asked by Salzman why she felt stupid, she replied, “Because I stupidly believed people were coming” to the after-party at his hotel room even though “a lot of time had elapsed.”

On cross examination by a Haggis lawyer, Priya Chaudhry, the witness said she never pitched Haggis on any of her project ideas in any of the time she spoke with him.