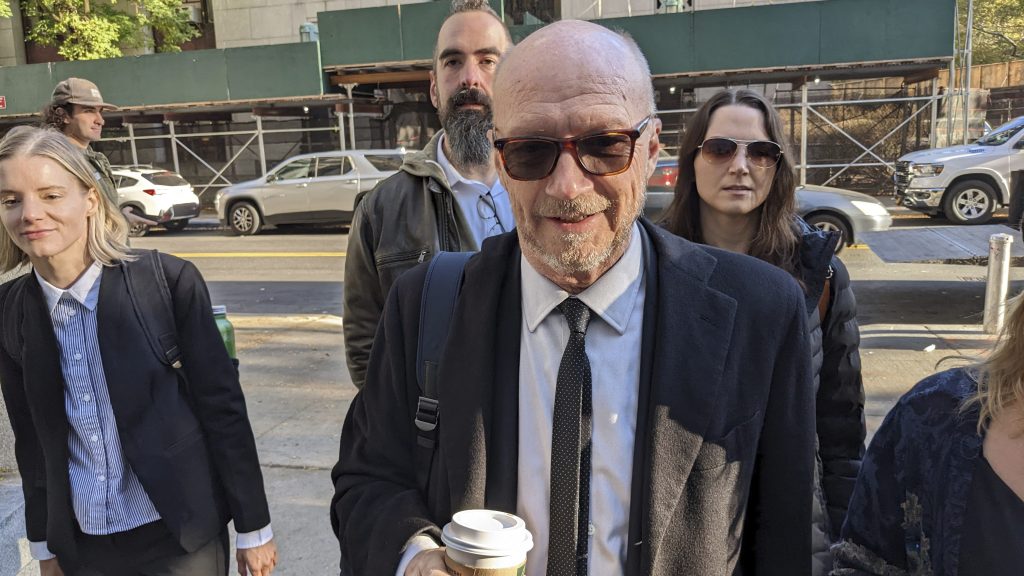 Haleigh Breest, the woman accusing Oscar-winning Crash director Paul Haggis of raping her in 2013, finished her direct testimony Friday with a last round of friendly questioning from one of her lawyers, Zoe Salzman — and then faced a more combative interrogation lasting almost three hours without a break.

A Haggis lawyer, Priya Chaudhry, confronted Breest about her sex life, drinking, prescription drug use and her actions on the night she went to Haggis’ apartment in Manhattan.

As a six-person jury of three men and three women looked on, with three alternates also seated, Chaudhry walked Breest through her earlier testimony in the sexual assault civil trial in New York. Under a cross-examination that sometimes turned sharp, Breest, a freelance film publicist at the time, said she went willingly to the moviemaker’s apartment after a film screening after-party that she had helped to organize and run, and drank wine with him after she had been drinking at the party.

In testimony steered by questions from Chaudhry, with Breest often straining at being limited to yes or no answers, she said she stayed in the apartment even after Haggis had kissed her without warning. “He slobbered over my face,” she testified, with Chaudhry pushing back, “Yes or no, did he kiss you for a few seconds?” “Yes,” Breest replied.

She said that as they drank wine in the kitchen, Haggis suddenly backed her up against a refrigerator and said, “You’re scared of me, aren’t you?” He also asked her age, and when she said 26, he replied, “Don’t act like a f*cking 18-year-old.”

She said she really was scared — “I was so scared and embarrassed” — but answered “no” to his question, which she said on cross-examination wasn’t true. She put on a “front,” she said, with a man she has previously described as a friend of her boss at the movie events company. She made no effort to collect the shoes and tote bag she had dropped in the kitchen, close to a hallway leading to a private elevator to the lobby, and she accepted a tour of the apartment that ended in the guest bedroom, where she said the rape took place.

“Mr. Haggis did not force you into that room, did he?” Chaudhry asked.

Breest said Haggis pushed her on to the guest bed, and during a struggle got her tights, dress and sweater off. “But during the struggle you never once kicked him, is that right?” Chaudhry said.

She said Haggis, kneeling on the bed, then took his own clothes off.

“You’re just sitting there naked on the bed watching Mr. Haggis take his shirt off?” Chaudry asked. Breest called that a “mischaracterization.”

The three-hour exchange ended shorty after that, and will resume after jurors return from lunch.

The trial got underway in a Manhattan courtroom this week with graphic testimony over three days from Breest. Describing the assault, she said, “I was like a trapped animal,” she told jurors Thursday.

Breest went public with her rape claim in 2017 amid a flurry of news reporting about film producer Harvey Weinstein serially sexually abusing women. Those revelations spawned a movement and a hashtag, #MeToo, encouraging victims to come forward with their experiences of sexual violence at the hands of powerful — and seemingly untouchable — men.

Breest has said that she decided to finally speak up four years after the assault when she heard Haggis condemn Weinstein. “The hypocrisy of it made her blood boil,” Salzman told the court.

As Breest testified Thursday, jurors in a federal courthouse around the corner were reaching a quick verdict in another high-profile sexual misconduct case involving a major film industry figure, and a story of a traumatic encounter in a New York apartment — but decades earlier — that also blew up in the year of #MeToo.

That jury ruled that Anthony Rapp had failed to prove his claim that in 1986, when he was 14, a 26-year-old Kevin Spacey tried to coerce him into sex. The original #MeToo moment has reverberated through a handful of trials pitting accusers against well-known men.

Spacey, like Haggis, is facing multiple accusers. Breest’s lawyers say they plan to call as many as four other women who will claim they, too, were victims of Haggis.

Haggis has said the sex with Breest was consensual and in opening arguments his lawyers pointed to texts Breest sent a friend and co-worker that described the sex as “rough and aggressive” but didn’t characterize it as rape. Salzman, in opening arguments, read the same text exchange, in which Breest also wrote, “Never, ever again … And I kept saying no.”

Haggis has also argued that Breest could be a cat’s paw for the Church of Scientology, which Haggis belonged to, then quit and publicly criticized the organization —  known for the celebrities in its ranks and for its willingness to sue critics — as a “cult.”

The last leg of direct questioning from Breest’s lawyer addressed this point.

“Are you now or have you ever been a member of the Church of Scientology” Salzman asked.

“No,” said Breest, adding that she has no family members in the organization, has never attended any Scientology events.

“Has Scientology provided you with any kind of support whatsoever in this case?” Salzman asked. Breest said no, explaining that hers is a contingency fee arrangements in which her lawyers only get paid a portion of any judgement she might receive if jurors find Haggis liable and award her money.