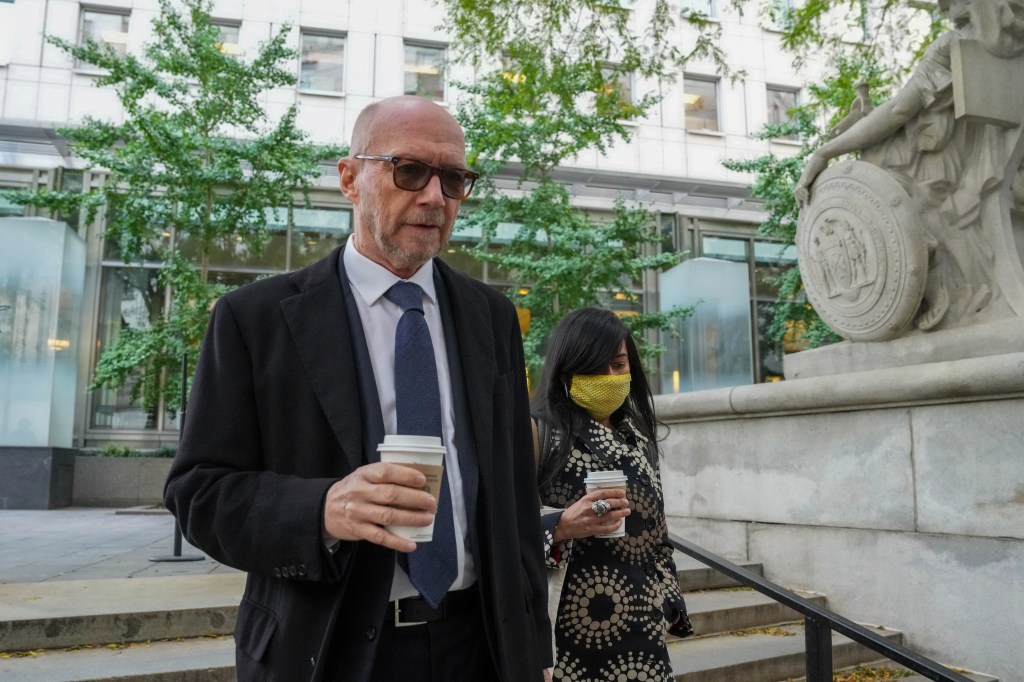 Paul Haggis will testify Wednesday in the New York sexual assault civil case brought against him by Haleigh Breest, a lawyer for Haggis said Tuesday. The lawyer, Seth Zuckerman, said that Haggis’ ex-wife, Deborah Rennard, is scheduled to go first, followed by Haggis.

Ten days of testimony have elapsed, with the Oscar-winning filmmaker and former Church of Scientology member watching the trial quietly from his seat at the defense table while his daughters are seated in the gallery directly behind him.

Breest, who is suing Haggis for unspecified damages, testified that he forced her into unprotected oral sex and intercourse in his apartment in Manhattan in 2013. Four other women called to testify by Breest said that Haggis assaulted or tried to assault them sexually in separate incidents between 1996 and 2015.

Haggis says the sex with Breest was consensual and, in court filings and through his lawyers, has said that he has never raped or coerced sex from anyone.

On Tuesday afternoon, a modeling agency executive said Breest telephoned her in 2013 sounding both “confused” and “excited” about a sexual encounter the night before with Haggis. But Lisa Benson, vice president of IMG Models in New York, also testified it is possible that phone call never happened.

Benson was appearing under subpoena as a defense witness for Haggis but said she considers Breest, a former IMG Models intern, “still a close friend” although the two haven’t spoken in person for more then two years. Defense lawyers have shown jurors a text from Benson urging Breest to be “Confident and still flirty” with Haggis next time she saw him.

On the stand, Benson was asked to recount the phone call in which Breest told her she had just slept with a famous director, Haggis, who was a guest at a movie-screening party on January 31, 2013 that Breest worked as a freelance events publicist. She was 26 and Haggis was 59.

“It was a confused tone of what exactly happened that night,” Benson said of the call. Benson added, “I think she was confused but also I think there was some sort of interest, too.” Pressed for specifics by Zuckerman, the lawyer for Haggis, Benson repeatedly began replies with “I don’t recall … ” Zuckerman responded by reading back portions of her 2020 deposition in the case.

Benson was reminded that under oath in 2020, she said Breest reported mutual flirting between her and Haggis at the movie-screening party. “He was a powerful director,” Benson said in 2020. “I think she found him attractive.” Breest hoped to see Haggis again, and was upset he wasn’t responding to her texts and emails, Benson said in 2020.

On Tuesday, Benson testified she had no memory of Breest saying she was raped or assaulted — either in that phone call or during an in-person visit a few days later when Breest flew to Los Angeles.

“Is that something you would have remembered?” Zuckerman said. “Yes,” Benson said.

On cross-examination, she found herself agreeing with a lawyer for Breest, Zoe Salzman, that the phone call might not have happened. Shown Breest’s mobile phone records, Benson acknowledged that neither of the two phone numbers she was using in 2013 appeared on the call logs for January or February of 2013.

“So that phone call you were talking about on direct, it didn’t happen?” Salzman asked. “I guess not.” Benson said.

Benson also testified that she couldn’t remember the contents of the in-person conversation in Los Angeles with Breest, only that it was a brief sit-down with champagne in Benson’s hotel room as she got dressed for dinner with a client, and that Breest had asked to meet in person about something “important” that might or might not have included discussing Haggis, but she couldn’t be sure.

In a trial where memory and recollection is a frequent source of conflict, Salzman reminded Benson that in 2004, the year she said she met Breest as an intern, Breest was still in high school.

Four years later, Benson testified, Breest told her over dinner in New York that what happened between her and Haggis was rape. “It was just a very different conversation,” she told Zuckerman. Questioned by Salzman, Benson said she wondered if she had misinterpreted what Breest told her in 2013. “I felt bad that I wasn’t a better friend and maybe I missed something,” she said.

Over an objection from Zuckerman, Salzman said, “Sitting here today …  you wish you had better understood what Haleigh Breest was trying to tell you in 2013, right?”

Jurors also heard from another woman who said Haggis expressed interest in her romantically and didn’t respond violently to being rejected. Genevieve Barker, a model, testified over a video link from Australia, where she lives, that she met Haggis in New York around 2016 and they struck up “a friendship with some flirting.”

“We kissed a couple of times and then it was clear to me, as we’d gotten to know each other, that I didn’t want to take it further physically,” Barker said. When she told him one day outside of Madison Square Garden that she didn’t want to kiss him any more, “He laughed it off and said, ‘Okay,” she testified. “It was non-reactive, really — strangely.”

She said they remain friends, and she once bunked in his guest bedroom for several nights when she was between leases, with him also there. “I felt completely comfortable,” she said. In 2018 she wrote a letter of support to Haggis after Breest sued him. “Ultimately, Paul respects my boundaries,” she wrote. “As a woman, as a person. as a friend. He is a stable force in my life and a champion of the people in his.”

On cross-examination, Barker said she doesn’t know any of Haggis’ accusers and has no knowledge of what he might have done when alone with them.

In the morning, jurors were told that Haggis would have been too weak and immobile, and in too much physical pain, from a recent back operation to commit the rape that Breest described. “I just don’t see it happening,” said Mark Dyrszka, a New York spinal surgeon, who testified for the Haggis defense team but hasn’t treated Haggis.

According to earlier testimony, Haggis underwent surgery in Rome on December 4, 2012 to have pieces of two herniated discs removed from his spine after a chiropractor injured his chronically bothersome back. Haggis was in Italy for a movie shoot. Eight weeks later, he flew 15 hours straight back to New York in time to drop his luggage at home and go to the movie-screening party on January 31 where Breest was working. Breest has said Haggis tore off her tights, dress and sweater before raping her.

The pressure on Haggis’ surgically healing back at the eight-week mark would have been so great in a violent struggle that he would have collapsed “in a puddle of pain” or twisted his back enough to re-injure himself, Dyrszka said. A lawyer for Breest, Ilann Maazel, played back a deposition of Haggis saying he didn’t remember experiencing any pain in the month after his surgery.

Maazel also asked Dyrszka if he was aware that in his deposition, Haggis “admits there was a struggle over removing the tights.” Dyrszka said he wasn’t.

He said it was possible to have sex after back surgery but not if the other person was resisting. He also said it was “super common” for someone to be mobile and walking after surgery as long as they don’t do anything too strenuous or lift heavy weights before they are fully healed, which he said can take months depending on the patient’s age and back health before the surgery.