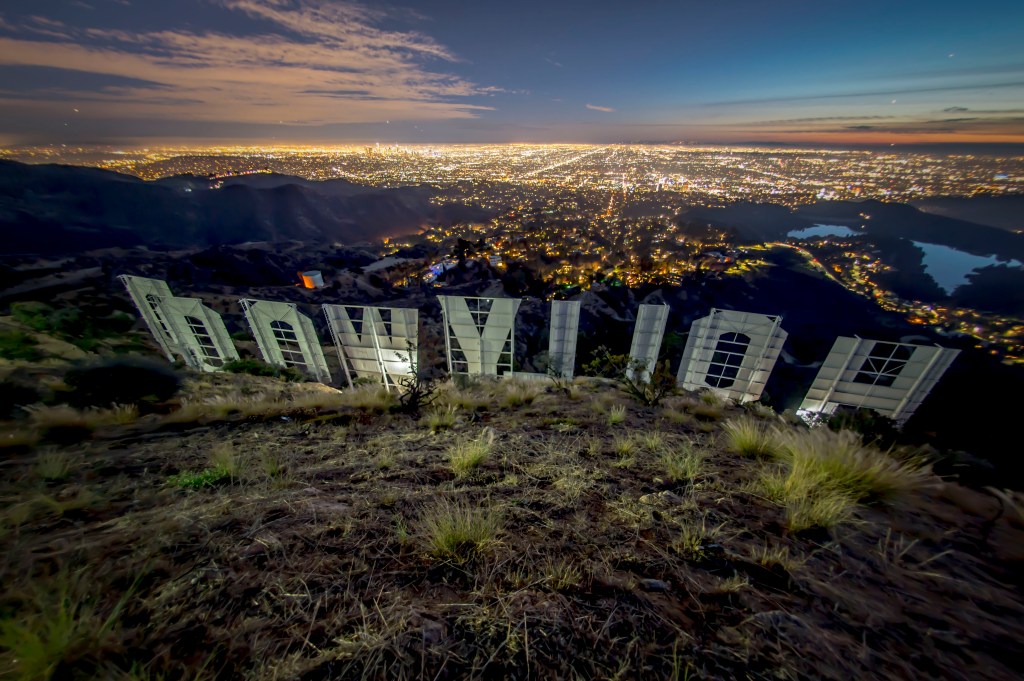 A team of painters were at work this week restoring the mega-photographed Hollywood sign, a mission that carries a perverse irony.

All week I’ve been assaulted by studies and reports describing how Hollywood, the industry town, has essentially surrendered its leadership in the universe of pop culture.

The message: The industry has dimmed its vision even though the Hollywood sign may linger on.

Originally signaling a real estate development, the Hollywood sign’s construction coincided with the first Oscars and thus became an optimistic symbol for the future of glitz and glamor. Now, decades later, the “founders” would be daunted by the cutbacks and layoffs that characterize today’s Hollywood.

In sector after sector of pop culture, America’s vision seems to be diminishing while other nations are expanding their roles in the new “multipolar” landscape.

Whether in music, social media or other platforms, a young consumer even in Hollywood is likely hooked on the same pop culture diet as their equivalent in Mumbai, whether it’s Afrobeat or Squid Game or a video from Prague. Indeed the energy of innovation is growing worldwide while Hollywood’s sags.

RELATED: History of the Hollywood Sign – A Photo Gallery

The data is occasionally ambiguous, but what it suggests is that consumers of pop culture worldwide are substantially cutting their preference for American product. Imports from the U.S. constituted 25% of the total in 2020, down from almost 40% a decade earlier, according to one World Trade Organization study.

Of course, Netflix and its brethren are pushing hard for international growth to counter limitations in the U.S. market, and Paramount+ is linking with Canal Plus in France.

But meanwhile, U.S. cultural imports from abroad have increased almost six-fold over the past decade. Squid Game aside, the biggest account on TikTok belongs to a Senegalese-Italian named Khaby Lame, whose posts mock media trends, according to The Economist.

In analyzing pop culture trends, that publication attributes the emergence of what it calls the multipolar pop culture to the obvious phenomena: Economic growth and domination of the internet. “The more consumers in one country are exposed to culture from other countries, the more adventuresome they are getting.”

In countries developing a strong music industry (India, Indonesia, etc.), the share of English-language tracks has fallen from 52% to 31% in five years alone. In the art world, where art fairs and shows were traditionally dominated by Americans and Europeans, artists from the rest of the world now represent over 50% of the scene, according to Dr. Steven Nash, a scholar in that field.

Should Hollywood take all this personally?

“The Hollywood studios have lost the big dream,” says one Hollywood power player who does not want to be named. “Where are the big titles, the big star vehicles?”

Steven Spielberg has unwittingly become a symbol of this more restricted vision, the power player observes. The filmmaker who once gave us Empire of the Sun or Schindler’s List is now focused on a story of his own youth in Arizona. The Fabelmans will win its share of plaudits, but it still reflects these more modest expectations.

James Cameron, whose Titanic resuscitated Hollywood in 1997 will lead the next Oscar race with Avatar: The Way of Water, but the other projected entries are more on the scale of CODA, last year’s surprise winner.

Overall, Hollywood movies earned 21% less in summer than a year earlier as it continues its post-pandemic recovery; summer typically accounts for 40% of overall receipts.

“The film industry greatly needs filmmakers like David Lean or Stanley Kubrick who worked on a broader canvas,” comments one producer. “I wish someone would make another Lawrence of Arabia or 2001: A Space Odyssey.”

Lean, who started as a film editor and then directed small films like Hobson’s Choice, dreamed of making broad-canvas films like Lawrence of Arabia or The Bridge on the River Kwai.

Kubrick started on low-budget films in New York but his big dream in his later years was a giant film about Napoleon. He died before he could put his film together.

Directors over the years loved shooting the Hollywood sign as a quick establishing shot. They may now worry about its connotation.