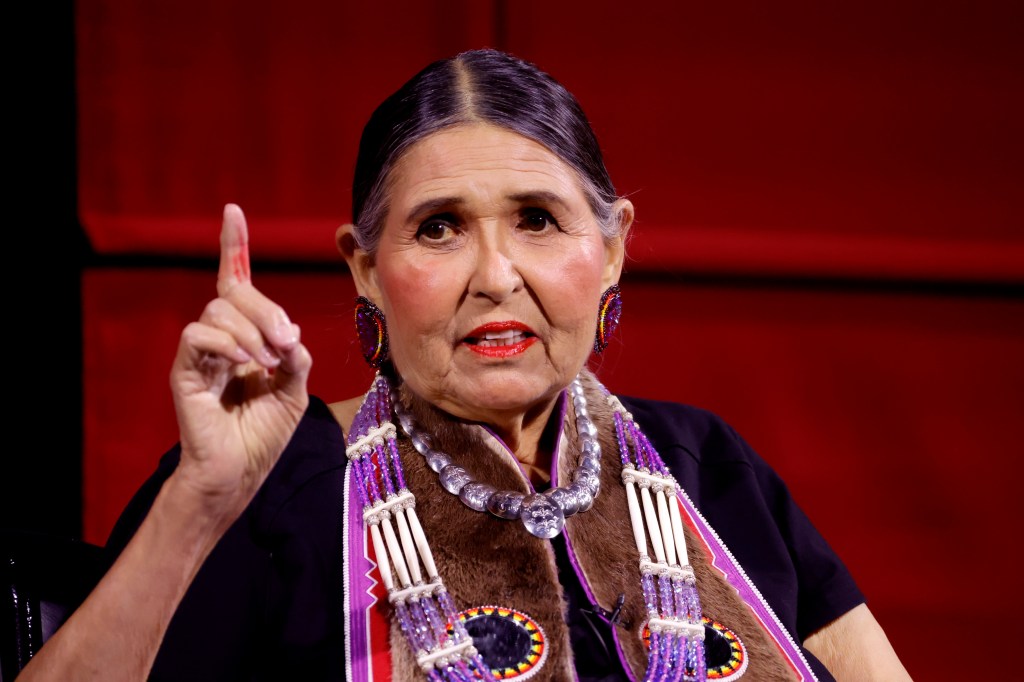 As this is written, the interested public is still waiting for something, anything, from the Academy of Motion Picture Arts and Sciences or its movie museum by way of response to their latest crisis.

Said crisis was provoked over the weekend by a detailed column in the San Francisco Chronicle claiming that the late Sacheen Littlefeather, recently celebrated and apologized to by the Academy for her on-stage Native American activism and the backlash thereto, was not a Native American at all.

Rather, said the column, citing documents and interviews with Littlefeather’s two surviving sisters, she was of European and Mexican-American extraction, with little or no Indian blood. What she did have, the piece said, was a history of instability, and of spreading untrue stories about her background and the alcoholism and abusive behavior of her California-born, Hispanic father.

Given the Academy’s investment in Littlefeather—who earlier this year received a formal letter of apology from the Academy’s then-president David Rubin, followed by a night of reconciliation that recalled her 1973 on-stage rejection of Marlon Brando’s Oscar, packaged with a three-hour “visual history” interview conducted by the museum’s director, Jacqueline Stewart—it’s going to take more than that. A lot more.

In truth, the museum’s credibility now hangs on getting Littlefeather right. If she has been unfairly tagged for manufacturing family history and trading on false cultural identity, researchers and lawyers at that repository of film history should be well-equipped to clear her. But if, God forbid, the museum in its inaugural year has succumbed to an unfortunate delusion, perhaps because it fit so neatly with contemporary notions about racism and cultural identity, there is no one better suited to clean up the mess.

It’s an obligation, both to those who fund the museum, and to those who would trust its unfolding vision of movie history.

Whatever the final verdict, any close examination of Littlefeather’s background and her claims of entertainment industry harassment through the years is going to be an unnerving experience. It takes only a viewing of the Stewart interview, posted on YouTube and conducted just weeks before Littlefeather’s death on Oct.2, to realize the depth of the problem.

By her own testimony, much of it said to be given here for the first time, Sacheen Littlefeather was a deeply troubled soul who struggled mightily with issues of identity and acceptance.

She was, by her own account, a diagnosed schizophrenic who spent a year in a mental hospital after a suicide attempt around the age of 19. She described the institution as “really a hell hole, ‘Cuckoo’s Nest.’” For nearly two months, she was catatonic, she said. Voices had pushed her toward suicide. A pair of doctors, whose names she does not disclose, used a terrifying regimen of “psychodrama”—they played her parents, while black-hooded figures listened in a dim-lit room—to help her reconstruct memories of childhood abuse and abandonment.

She was on Thorazine then, and other meds later, Littlefeather told Stewart. There was a later episode, but she mostly stabilized with much help from a San Francisco Bay Area Native American community that crystallized around a 19-month occupation of Alcatraz Island that began in 1969. She was drawn by the feeling of “tribal togetherness,” said Littlefeather.

Learning about and sharing Indian life, “I got to rediscover who I am, who I really am,” Littlefeather told Stewart. In particular, she became invested in her father’s heritage. “I hated my Indian father. It was a fact. I’m half Indian,” she told Stewart.

While some ‘facts’ are now disputed by Littlefeather’s sisters, there is no doubt that she soon afterward made contact by letter with Marlon Brando, who backed Native American activists at the time, and cultivated a relationship that led to her speech in his stead at the 1973 Oscar ceremony.

Stewart’s interview includes not much detail about Littlefeather’s supposed boycott by the film industry. Even regarding a much-repeated claim that John Wayne had to be retrained by six security men from hauling her off the stage is somewhat muffled here. She didn’t see the imbroglio, but “heard a commotion backstage.” Later encounters with the likes of Walter Matthau and Lana Turner were delightful; but she says someone fired two shots in her direction as she arrived at Brando’s home after the famous show. “The angels and my ancestors were really looking after me,” says Littlefeather.

There are some startling claims on the video. Littlefeather, for instance, says food was poisoned at the first Thanksgiving dinner, causing Indians to die, for which the Pilgrims gave thanks. At Wounded Knee, the FBI was supposedly blocked from hauling Indian activists to Guantanamo-like oblivion by world media attention to Littlefeather.

In the interview, she goes unchallenged. The more amazing statements draw an occasional ‘wow’ from Stewart, or a note that things aren’t taught that way in school.

But something more is in order at this point—perhaps a well-researched museum exhibit, tracing roots, realities, and final lessons to be learned here.

Warner Bros Discovery Will Take Up To $4.3 Billion In Restructuring Charges From Merger