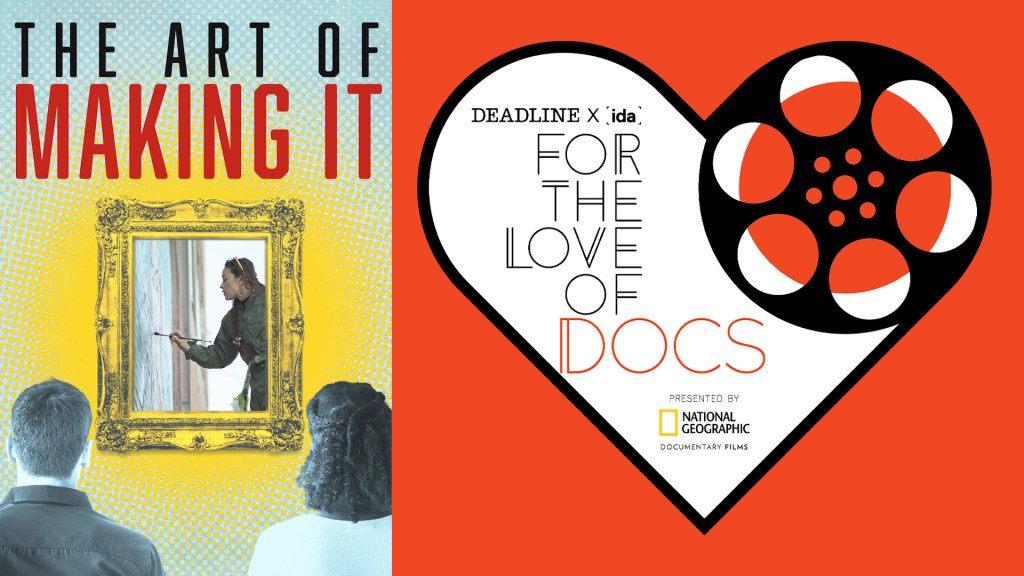 In one of his most famous songs, Stephen Sondheim wrote about the challenge of creating art: “Having just a vision’s no solution/Everything depends on execution/The art of making art, is putting it together.”

But what if, as an aspiring talent, you’ve got the vision, the execution, you put it together just so and yet still can’t make it in the art world? That is, in some respects, the dilemma explored in the documentary The Art of Making It, which played as part of Deadline’s For the Love of Docs virtual event series. It examines an art ecosystem “on the verge of collapse,” as the filmmakers put it, one that serves extremely wealthy gallery owners, super-rich collectors, museum board grandees, a few “name” artists, but leaves young creators struggling to launch and sustain careers.

“I realized how challenging it is and also how at the highest levels of the art world, it seems like art is typically dialogued about more as a commodity and less as a place to exchange ideas,” director Kelcey Edwards observed during a panel discussion after the screening. “I started to kind of become concerned that these artists who were trying to express themselves and foster important cultural dialogue about some of the most pressing issues of our time were running against the unsustainability of what they were trying to do and so many barriers to entry.”

One of the only tickets to success for gifted but unknown artists is to pursue an MFA degree from a place like Yale University, which charges hefty tuition fees. Despite the prohibitive costs, what grads actually wind up with is a lottery ticket, with low odds of paying off.

“We were hoping to shine a light on people crazy enough to take on all this debt and receive all this education. And even with a terminal degree from a school like Yale, the chances of making It — which in our minds was being able to support yourself, doing what you’re trained to do — was less than 5 percent,” noted producer Debi Wisch. “I think you’d be hard pressed to find any other… nonlinear profession where the chances of making it are sort of so serendipitous and risky.”

The filmmakers interviewed an array of artists, art critics, professors, curators, gallery owners, art dealers, collectors, and museum directors to paint a portrait of a world that is insular by design. The film explores many themes, including the purpose of museums (an 18th century idea that perhaps doesn’t serve contemporary society, the documentary suggests), the lack of public funding for the arts, wealthy collectors buying art and squirreling it away from public view, and gallery owners joining museum boards, which perhaps constitutes a conflict of interest because they man the gates at two entry points to success.

The range of voices created a storytelling challenge for editor Nyneve Laura Minnear.

“It was 38 interviews, something like that, this daunting task of weaving together,” Minnear explained. “I came into this not so familiar with the art world — other than being an art lover and visiting museums — but learning about the issues through the interviewers themselves is sort of this process that, editors, we like to talk about it as an archeological process, an excavation of ideas, and how do you start to see connections and patterns and start to see how the footage speaks for itself?”

Minnear said the creative team behind the documentary set themselves a difficult task (as Sondheim wrote) “putting it together.”

“[We came] up with this method where each scene had to do three things: It had to help us fall in love with the art and artists, surprise us and be something new you didn’t necessarily know about the art world, and be entertaining,” Minnear said. “The pace of finding this way to make it entertaining while you’re also digesting a lot of information was very, very challenging.”

Edwards came to the film with an ideal background. Her father was a museum curator and in her 20s she started a nonprofit art gallery herself in Austin, Texas. Over time, she has seen some positive change in the art world, but not enough.

“There is more accountability and transparency than there has been, theoretically,” Edwards commented. “Just the fact that a film like this is getting made and seen is important… One of the biggest things I noticed in my interviews was how relieved everyone was to be talking about these things. It was palpable… People were dying to lift this veil. I think the art world, in a funny way, is sick of itself in the ways that it is problematic and contradictory and unjust and unfair.”

Edwards added, “I think the people engaging in the superficial kind of layers of [the art world] are trying to figure out themselves, how can we do a better job, where did we fall in love with all of this in the first place? There’s a long way to go.”

The Art of Making It comes from Wischful Thinking Productions, in association with Artemis Rising Foundation, Be Forward Productions and Iron Gate East Productions. Watch the full conversation with the filmmakers above.

For the Love of Docs screens a new documentary every Tuesday night into December. Our virtual event series is presented by National Geographic.