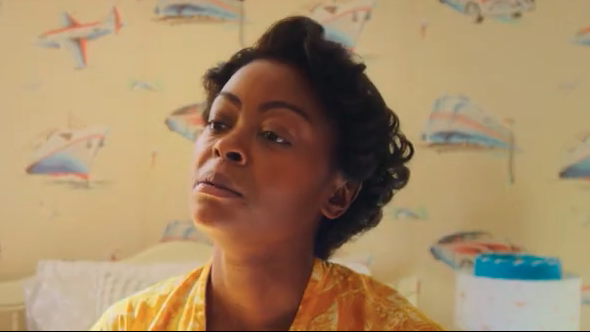 Till directed by Chinonye Chukwu and written by Chukwu, Keith Beauchamp, and Michael Reilly follows Mamie Till, a woman who moved the nation with her resilience in the face of her teenage son’s death. The film stars Danielle Deadwyler, Jalyn Hall, Whoopi Goldberg, and Haley Bennett.

Mamie Till (Deadwyler) is a single mother living in Chicago with her 14-year-old son Emmett (Hall). The city is more accessible to adjust to than being Black in the south. As Emmett sings commercial jingles in front of the television, Mamie remarks that he didn’t stutter once, making it known that he has a speech impediment. The young boy is preparing to go on a trip to Mississippi (in the Jim Crow south) to visit family, but Mamie is apprehensive about him traveling. She warns him about his behavior around White people as a reminder that White people aren’t the same everywhere. Mamie is emotional at the train station as Emmett boards the train, and as the train pulls off, she stands there on the platform crying tears of sorrow. A Mother’s tuition is strong, and her facial expressions show she knows this will be the last time the two are together.

When we first see Emmett down south, he is picking cotton with his cousins. Country life is slow and uneventful for the carefree young man, so he compliments Carolyn Bryant’s (Bennett) looks without thinking of the consequences because she takes his forwardness as an insult. Emmett and his cousins want to keep the incident a secret from the elders and go about their business. But would it have mattered? Someone would have paid the price even if he was sent back to Chicago.

Chukwu’s film is less about what happened to Emmett Till and more about Mamie and how the Black community, from coast to coast, rallied around her as she tried to get justice for her son. His death became a national issue, broadcast all over the news, with families of all races weighing in on the news of his death.

What wasn’t anticipated was that other Black men were complicit in the demise of this teenage boy. It seems inconceivable that would be the case, but it is plausible. This situation changed the face of racial dynamics in America. Along the journey, Mamie learns this situation is no longer her own, but it belongs to the people whether she likes it or not. Top that off with her processing survivor’s guilt, she has no choice but to share her trauma out of self-preservation. No human can carry that load alone.

Chukwu deploys some fascinating techniques–come right out of the horror genre. Dramatic close-ups, an eerie score, and the ominous air of dread reign throughout the film’s first half. The fear factor shouldn’t come as a surprise because to be Black in America, to be Black in this world, is to live in a state of terror. There is something about the way the film uses sound and score as an identifier. It also softens the blow, so the audience doesn’t have to see violence but can hear it, which can sometimes be worse than any visual can show. It’s shrill, piercing, and used as preparation for what comes next. The costumes styling by Marci Rogers is crisp and intentional regarding Mamie Till’s color palette and fashion that reflects the character’s mood.

“Carolyn Bryant is going to be fine,” said Mamie after reading the newspaper about the men who were indicted with no mention of Carolyn Bryant and her lies getting indicted as well. Mamie was right, though. In 2022, charges were brought against Bryant for kidnapping and manslaughter, but the Mississippi grand jury declined to move forward. There is proof she flat-out lied, and after his killers were found not guilty by the courts, they admitted to murdering the child out in the open but were allowed to thrive and live to old age, just like Carolyn.

I knew the end result of Till when I walked into the theater, but Chukwu, Beauchamp, and Reilly’s script shapes a film that follows the ripple effect of racial hatred and a death that shocked the U.S. in the 1950s. Modern-day society is still reeling from Jim Crow-era laws. The Senate just passed the anti-lynching law in March of 2022, 157 years after the 13th Amendment was ratified.

Till is an exceptional movie that probes inner and outer trauma and is an exhausting endeavor to sit through. Revisiting the life of the Till family is a reminder that the more things change, the more things stay the same.

Chinonye Chukwu On Making ‘Till’: “Where The Camera Focuses Is Its Own Act Of Resistance” – New York Film Festival