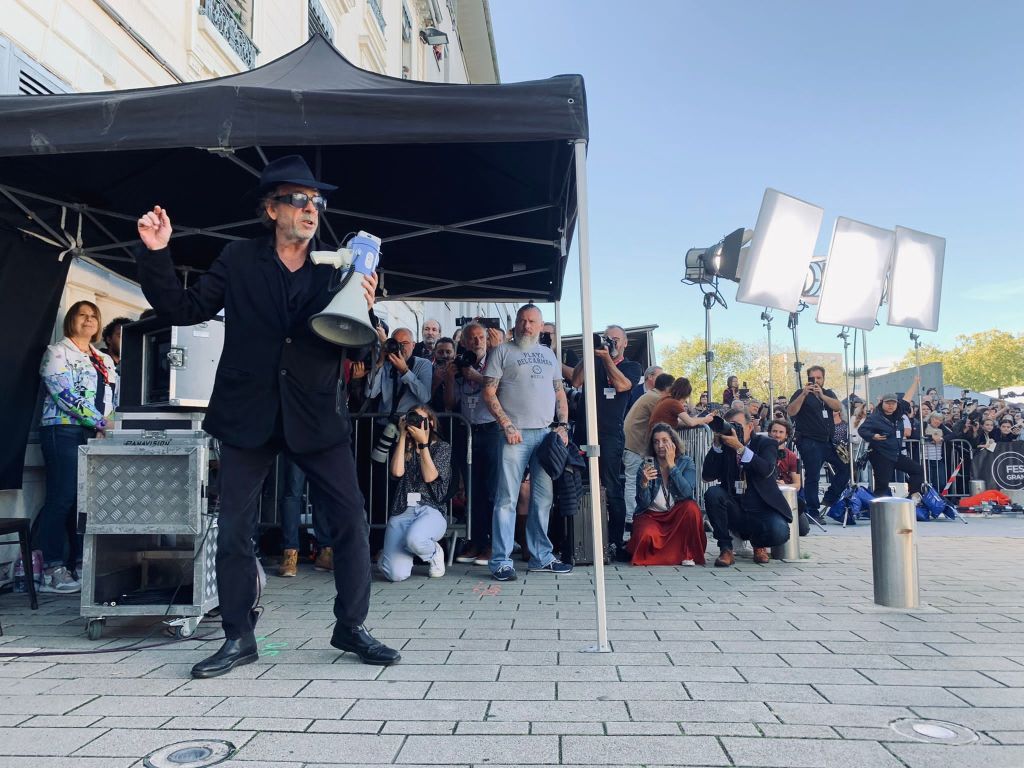 Tim Burton trod in the footsteps of 19th Century French cinema pioneers Auguste and Louis Lumière on Saturday as he directed his own version of their 1895 film La Sortie De L’Usine on the site of their former factory in Lyon.

The filmmaker was in Lyon as guest of honor of the Lumière Festival, the cinema heritage festival spearheaded by Cannes delegate general Thierry Frémaux in his other role as director of the Institut Lumière.

As the 14th recipient of the festival’s Prix Institut this year he was also invited to recreate the Lumière Brothers’ iconic first film. Past recipients of the prize, who have also shot their own versions include Martin Scorsese, Francis Ford Coppola and Jane Campion.

The original 50-second work captures workers pouring out of the Lumière Factory, which produced hundreds of thousands of photographic plates a year at the time.

The doorway and hallway are all that remains of the factory. Saved from demolition in the 1980s, they have been preserved as part of the Institut Lumière’s modern cinema complex, called the Hangar du Premier-Film Cinema.

In preparation for the shoot, Frémaux explained that at least three versions of the film have been identified in the Lumière archive, which he then screened to the 150 extras invited to take part.

True to form, Burton opted to playfully subvert the original, joking that he had “a history” of working with extras

“I want you all to be bad extras. Pretend like you’re walking normally but you bump into each other. Do what I know extras do, point at something for no reason, look in the camera, have a misdirection, basically just chaos all under the guise of acting natural,” he said.

“No extra I’ve ever worked with could just walk out of a factory normally. I want you to channel the spirit of great extra acting,” he said.

Shot with exactly the same aspect ratio and duration as the original films, these recreations have never been shown on the internet and are instead preserved in the Institut Lumière archives to only be shown on the big screen.

The shoot was just one appointment in a busy Lumière itinerary for Burton which saw him receive the Prix Lumière in front of more than 5,000 people amid tumultuous scenes at Lyon’s convention centre on Friday evening.

The director also gave a masterclass, where he discussed his studio career and connection with Johnny Depp, as well as a press conference, at which he suggested he would never work with Disney again, following his experiences on Dumbo.

The trip ended with a Tim Burton all-nighter on Saturday evening showing Beetlejuice, Ed Wood, Mars Attacks! and Sleepy Hollow back to back.