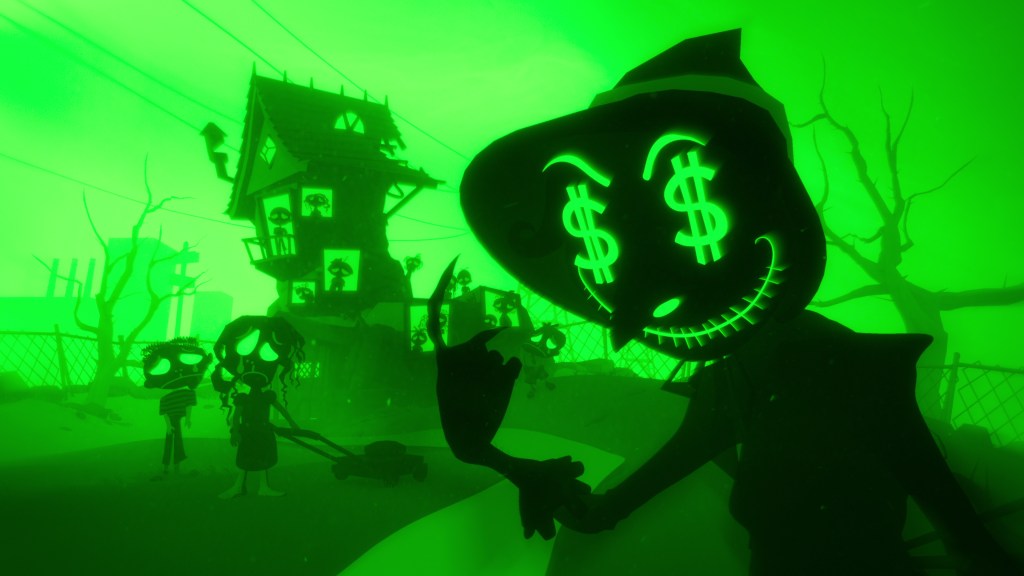 In 2009, it was considered almost shocking when Pixar’s Up addressed the subject of death in its now-classic opening sequence, a bittersweet mini-movie of love and loss.

Nowadays, after 2017’s Coco and 2020’s Soul, and with Guillermo Del Toro’s Pinocchio on the horizon, it’s hard to believe it was ever thought that a commercial animated movie couldn’t — or, more pertinently, shouldn’t — tackle such dark themes. But while that door is now open, Henry Selick’s Wendell & Wild finds inventive ways to blow the hinges off, going even further into cult territory than he has ever been before.

In retrospect, who would have thought that The Nightmare Before Christmas, Selick’s cheerily gothic 1993 collaboration with Tim Burton, would turn out to be merely a curtain-raiser to the director’s own bizarre sensibilities, which led to the misunderstood 2001 flop Monkeybone and 2009’s rather better-received Coraline? Like both those films, Wendell & Wild is macabre in thought and dizzy in detail, taking even further the director’s obsession with other worlds and resulting in a relatively gritty, young adult-skewed, stop-motion Halloween opus that will confound Fox News with its steady emphasis on inclusivity and won’t easily translate into sales of Funko Pop dolls.

Cowritten with Jordan Peele, whose Monkeypaw company produced, this is quite the morality tale — and one that arguably stands above Peele’s last two movies, Us and Nope, in terms of clarity. The latter’s sensibility sits well with Selick’s — both seem to share a fascination with fairgrounds and circuses — which means there’s plenty going on under the surface, too. A recent reference point here is sleeper-hit horror Barbarian; although Wendell & Wild isn’t at all from the same stable of shock and gore, it does deal with ideas of gentrification, and its fictional town of Rust Bank mirrors the run-down Detroit: with no cash, no jobs, and no hope, a once-thriving rural idyll is left to rack and ruin, its empty homes being bought up wholesale by the shadowy Klax Korp.

The set-up is quick and precise — in the car on the way home from a party in the grounds of her father’s brewery, Kat (Lyric Ross) bites into a worm-infested toffee apple and screams, causing a crash that kills both parents. Being orphaned, we see in a grim shadowplay, leads to her first to a care home, where she is bullied, and then into juvenile detention after fighting back.

Meanwhile Kat is transferred to Rust Bank Catholic School, where, in a refreshing twist on familiar high-school tropes, the girls are not only not mean but, in one case, also trans, a subject that is raised early and soon forgotten. In this way, Kat is the mean girl here, rejecting the friendship of Raúl (formerly Ramona) until Wendell and Wild visit her in her dreams and promise to bring her parents back to life, ultimately by means of the hair cream that is soon revealed to have more stimulating properties than just the psychedelic kind.

Kat involves Raúl in a demon-summoning ritual, but it backfires when Wendell and Wild are diverted on their way up and their corpse-reanimating skills are appropriated instead by the Klax Korp, who plan to resurrect some of their old allies.

Despite the title, and two funny but morally shaded performances by Key and Peele that gently subvert their TV skit-show personas, the film is really Kat’s story, and once that’s established it’s easy to see the endgame: Kat needs to deal with her trauma and, as a bonus, save the town she once loved so much.

But although this might seem obvious, Selick’s film doesn’t fall into easy sentiment, which it often really, really looks like it’s just about to do. There’s a massively important subtext here, mostly about the way marginalized people fall so easily foul of the law and how the state profits from that pattern of offending, but Selick’s film stops just a little short of hammering that home.

In fact, it’s surprisingly subtle for a film so lurid, and, for the observant, the music has a story to tell too, as can be gathered from Kat’s Native American case worker, who wears a Link Wray T-shirt (at the height of his late-’50s fame, the guitarist was forced to hide his Shawnee roots).

There’s also something in the needle-drops that works quite superbly with the exquisite visuals on display. In particular, amid tracks by Fishbone and Living Colour, there are two songs by U.K. punk band X Ray Spex, whose mixed-race singer Poly Styrene articulates Kat’s pent-up frustration with ear-shattering perfection.