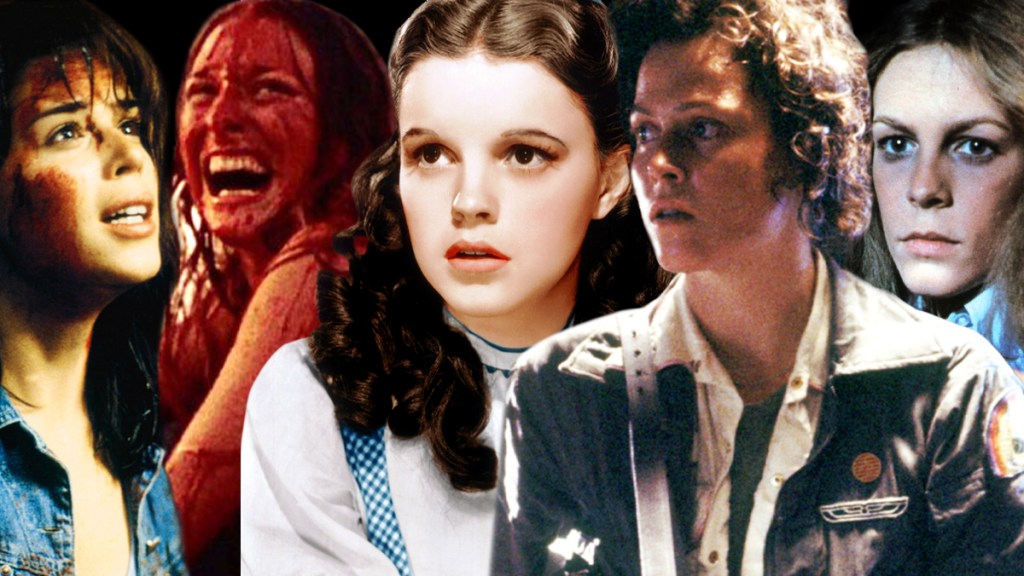 The Final Girl trope defined characteristics of the last character left alive to confront the killer in horror films, particularly in slasher films. The rise of feminism in the 1970s became a milestone in the genre as the damsel in distress did not need a man to rescue her anymore. Sally Hardesty from The Texas Chain Saw Massacre, Ellen Ripley in the Alien franchise, and Jess Bradford from Black Christmas all portrayed strong female characters who all fought back their assailant.

Laurie Strode is one of the most famous final girls in the Halloween franchise that was first released in 1978 and deemed Laurie as the victim of her brother Michael Myers. As the final girl characteristics have developed, like the franchise, she no longer waits around for Michael instead is ready to fight him and is no longer a target. The baton was passed to the 80s films that followed the trope with Alice Hardy, Ginny Field, and Christine “Chris” Higgins in the Friday The 13th franchise and Nancy Thompson from A Nightmare On Elm Street.

The 90s would continue the tradition with Sidney Prescott, portrayed by Neve Campbell as the longest surviving and character-centered final girl of nine different assailants as the Ghostface killer in The Scream franchise. Lest we not forget Gale weathers from Scream, who also deserves a mention as does Julie James in I Know What You Did Last Summer.

The final girl trope may have been coined to only include slasher films from the 70s, but before that was Lila Crane from Alfred Hitchcock’s Psycho, who deserves an honorable mention for surviving Norman Bates. But could the final girl be dated back even further? Could the original final girl be Dorothy Gale, portrayed by Judy Garland in the 1939 classic The Wizard Of Oz? Here are the facts by professor Carol J. Clover in her 1992 book “Men, Women, and Chainsaws,” who coined the term final girl.

According to Clover, the final girl is typically sexually unavailable or virginal, avoiding the vices of the victims and occasionally the final girl will have a shared history with the killer. Dorothy is a young girl who is taunted by the Wicked Witch of the West, who represents her neighbor Miss Gulch and threatens to destroy Toto in Kansas and Dorthy, in the land of Munchkins for accidentally killing her sister, The Wicked Witch of the East when Dorothy’s house drops on her.

Dorothy also represents other qualities of the final girl of “investigating consciousness” and moving the narrative forward and as such, she exhibits intelligence, curiosity, and vigilance as she travels on the yellow brick road encountering obstacles along the way.

During the final girl’s confrontation with the killer, Clover argues, she becomes masculinized through “phallic appropriation” by taking up a weapon, such as a knife or a chainsaw, against the killer. In this case, her weapon is water that melts the witch after Dorothy throws it to put out the scarecrows’ flames inflicted by the witch. Dorothy ends up taking the witches’ weapon, a long wooden broom which can be determined as phallic as riding on one was a symbol of female sexuality, considering the broom was a symbol of female domesticity back in the middle ages.

Overall the Wicked Witch of the West is constantly terrorizing Dorothy by stalking and threatening her. She fails in attempting to poison Dorothy in the field of poppies and sends out her flying monkeys to kidnap and entrap Dorothy in her castle with the intent of killing her but Dorothy survives this abject terror inflicted on her and thus makes her an honorable final girl.